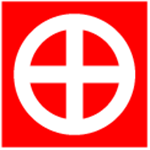 The corporate emblem, "the Circle Crossed" originates with Genzo Shimadzu, the founder of Shimadzu Corporation, who decided to use it as our trademark in 1912.
Later, the emblem was re-designed into the present trademark.
The solid circular margin has a width of 1/8 the outer diameter of the circle while the cross bars are another 10% thicker.

This design is based on scientific data used to optimize the beauty of uniformity as the dimensional ratios used correct the illusion of difference in widths leading to a pleasing perception of balance.

In late 16th century, when Yoshihiro Shimadzu, the lord of Satsuma Province, passed through Banshu Himeji to visit his land newly given to him by Hideyoshi Toyotomi, one of the three warriors who reunited Japan, Sohbei Inoue, an ancestor of Genzo Shimadzu was given a role to attend the lord. In recognition of the services of Sohbei Inoue, it is reported that Lord Yoshihiro Shimadzu allowed him to use the name of Shimadzu and the family emblem, "the Circle Crossed." 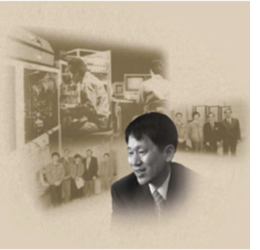 Tanaka received the prize for the development of soft desorption ionization methods for mass spectrometric analyses of biological macromolecules to identify and reveal the structures of such molecules. 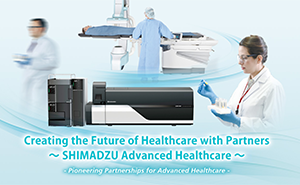